In Broken Roads, there is no “right” choice

If the apocalypse happened tomorrow, what kind of person would you become? Would you do everything in your power to protect the people you love, even if it means killing others? Would you like to run away and save your own skin? Or will you simply give up, accept the pointlessness of your destiny and wander through the waste aimlessly? These are the questions asked by Broken Roads, a new game from Drop Bear Bytes and Team17, which will be released on PC and consoles in 2022.

Broken Roads is a storytelling RPG that takes you through the wasteland of post-apocalyptic Western Australia, carefully crafted to bring authentic parts of the current countryside to this darker and desolate future.

It’s designed by a team with a serious pedigree in the world of isometric RPGs – creative chef Colin McComb has sports credits on genre games such as Fallout 2, Wasteland 2, and Torment: Tides of Numenera, the latter on which he worked with Drop Bear Bytes, narrative leader Leanne Taylor-Giles, who has also written for triple A titles like Watch Dogs 2 and Rainbow Six Siege.

Scenarios in Broken Roads are designed so that you can tackle them however you want, including advancing through extended dialogue trees, or trying to get out of a bad situation in tense turn-based combat, if you think you need to. You are free to create your character however you like – there is no class system, so you can equip your party with all the tools you need at that time. You shape your character’s future early in the game by answering moral dilemmas related to their history, to which there are no right or wrong answers.

Indeed, this post-apocalyptic world is almost entirely devoid of right answers. There will be many difficult choices to make on your journey through Western Australia, all of which will have an effect on the relationships you have within your group and the ends you will work towards. A choice that may seem trivial at the time may well come back to haunt you later and change the very path you follow as nonlinear history weaves your decisions – and their consequences – into the tapestry of the world.

But don’t expect the typical good or bad binary. In Broken Roads, your morality is represented by a literal moral compass, with four quadrants defining your character through their actions.

Maybe you choose to play a role as a humanist, standing up for the dignity of everyone in your party. Or your choices may steer you towards a nihilistic attitude in your quest for yourself, giving up anything that does not lead to the achievement of your own goals. Maybe you’re a little Machiavellian, using trickery to achieve your goals but ultimately looking for the best option for everyone, inadvertently directing yourself further into the utility quadrant. 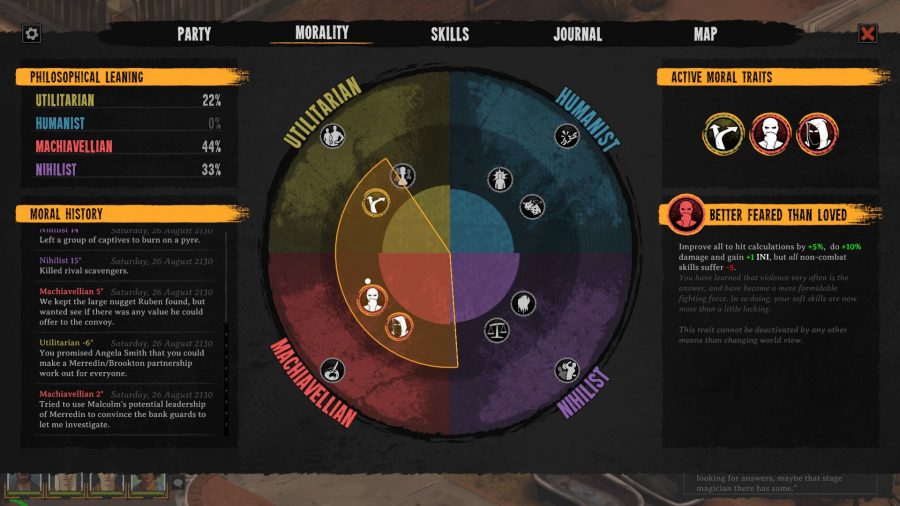 Your worldview will change and react as the game progresses, with choices closely tied to your current moral beliefs – sometimes opening up unexpected options or encouraging you to reconsider what you thought a quadrant might represent. Maintaining certain beliefs will open up specific traits suited to your moral, allowing your role play to go even further.

But the moral compass element won’t lock you into a single playstyle. Major choices that go completely against the type may be hidden from you – you can’t expect to turn your heel all the way around in the game. last act after saving everyone you meet, after all. But the small choices will not be completely blocked. Even the most nihilistic and pessimistic people can find a reason to work with others from time to time. 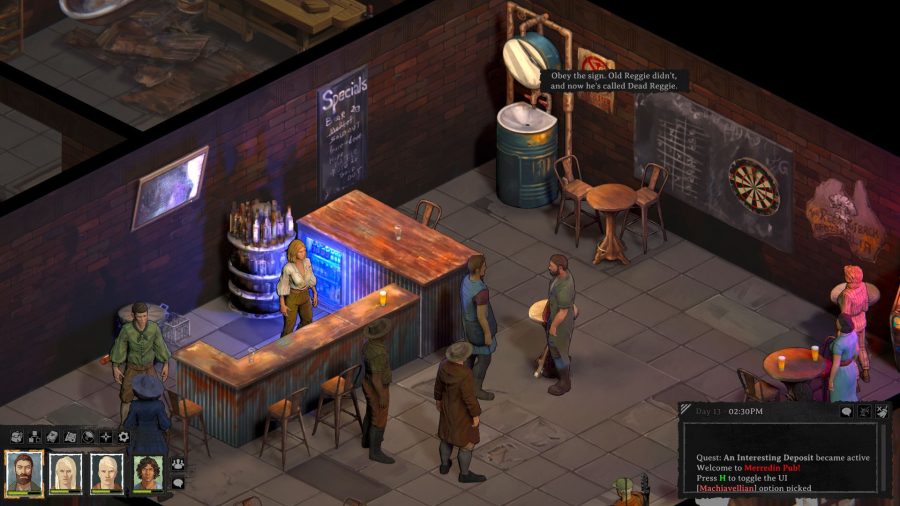 It’s not all misfortune, sadness and philosophy, of course. No matter where your moral compass points, Broken Roads will draw you in with its beautiful hand-drawn illustrations and precise and authentic depiction of Australia, right down to the characters you meet. You might never have been to Kokeby in real life – and you certainly have never seen it like this before – but the team made sure these places come to life in the wilderness while staying true to the reality.

If creating your own character however you see fit, following your own moral compass, and exploring an often forgotten world in games is an experience you’ve been looking for, then Broken Roads will be the game for you. Expect its release on PC, PS4, PS5, Switch, Xbox One, and Xbox Series consoles in 2022.